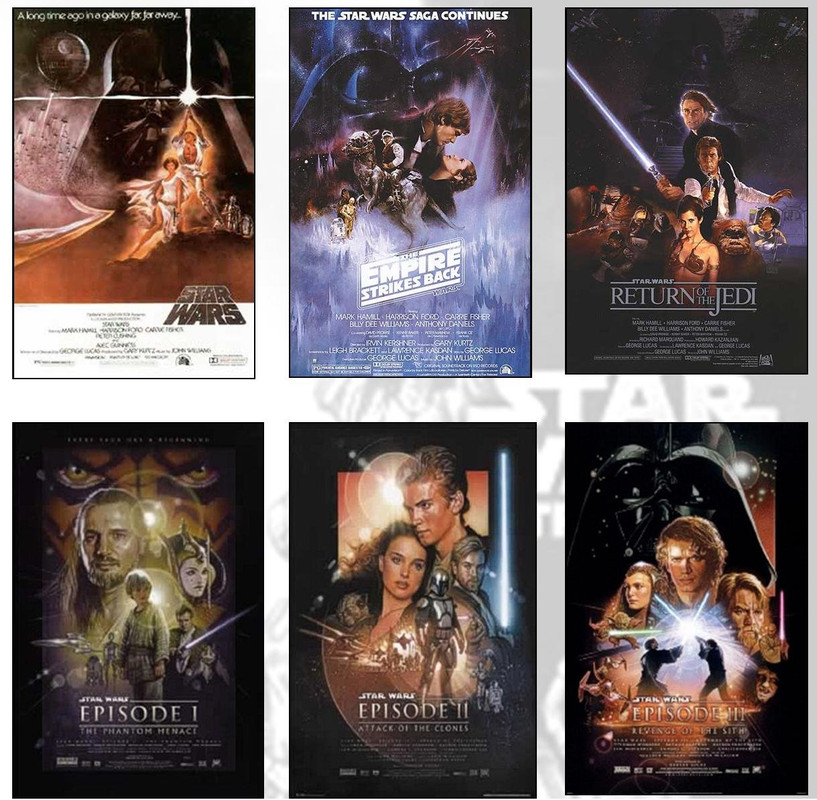 1977 – Part IV in a George Lucas epic, Star Wars: A New Hope opens with a rebel ship being boarded by the tyrannical Darth Vader. The plot then follows the life of a simple farmboy, Luke Skywalker, as he and his newly met allies (Han Solo, Chewbacca, Ben Kenobi, C-3PO, R2-D2) attempt to rescue a rebel leader, Princess Leia, from the clutches of the Empire. The conclusion is culminated as the Rebels, including Skywalker and flying ace Wedge Antilles make an attack on the Empires most powerful and ominous weapon, the Death Star.

1980 – Fleeing the evil Galactic Empire, the rebels abandon their new base on Hoth. Princess Leia, Han Solo and the droid C-3P0 escape in the damaged Millenium Falcon, but are later captured by Lord Darth Vader on Bespin. Skywalker and the droid R2-D2, meanwhile, follows Ben Kenobi’s posthumous command and receives Jedi training by Yoda on Dagobah. Will Skywalker manage to rescue his friends from the dark lord?

1983 – Darth Vader and the Empire are building a new, indestructible Death Star. Meanwhile, Han Solo has been imprisoned, and Luke Skywalker has sent R2D2 and C3PO to try and free him. Princess Leia – disguised as a bounty hunter – and Chewbacca go along as well. The final battle takes place on the moon of Endor, with its natural inhabitants, the Ewoks, lending a hand to the rebels. Will Darth Vader and the dark side overcome the rebels and take over the universe ?

1999 – The evil Trade Federation, led by Nute Gunray is planning to take over the peaceful world of Naboo. Jedi’s Qui-Gon Jinn and Obi-Wan Kenobi are sent to confront the leaders. But not everything goes to plan. The two Jedis escape, and along with their new Gungan friend, Jar Jar Binks head to Naboo to warn Queen Amidala, but droids have already started to capture Naboo and the Queen is not safe there. Eventually they land on Tatooine, where they become friends with a young boy known as Anakin Skywalker. Qui-Gon is curious about the boy, and sees a bright future for him. The group must now find a way of getting to Coruscant and to finally solve this trade dispute, but there is someone else hiding in the shadows. Are the sith really extinct? Is the Queen who she really says she is? and what’s so special about this young boy?

2002 – Ten years after the ‘Phantom Menace’ threatened the planet Naboo, Padmé Amidala is now a Senator representing her homeworld. A faction of political separatists, led by Count Dooku, attempts to assassinate her. There aren’t enough Jedi to defend the Republic against the threat, so Chancellor Palpatine enlists the aid of Jango Fett, who promises that his army of clones will handle the situation. Meanwhile, Obi-Wan Kenobi continues to train the young Jedi Anakin Skywalker, who fears that the Jedi code will forbid his growing romance with Amidala.

2005 – It is three years after the Clone Wars. The leader of the droid army, General Grievous, has captured Chancellor Palpatine on board his ship, the Invisible Hand. Jedi Master Obi-Wan Kenobi and Jedi Knight Anakin Skywalker must fly through Coruscant safely, and enter the Invisible Hand so that they can rescue the captive Chancellor. Just when Palpatine is about to be released, Count Dooku shows up. Obi-Wan and Anakin both battle it out with him, but Obi-Wan ends up unconscious. Anakin slices off his head and kills him. Anakin carries Obi-Wan, and Palpatine follows him. They meet General Grievous face to face, and Anakin tries to fly the last half of the ship so that they can safely land on Coruscant. Later, Palpatine starts acting strange, constantly manipulating Anakin into believing that the Jedi Council is against him. Eventually, it is found out that he is the Dark Lord of the Sith. Jedi Master Mace Windu fights him…

Although small sized re-encoding is a flawed concept, we always strive very hard to preserve MAXIMUM DETAILS with our releases. We hope that you enjoy them as much as we enjoy working on them 🙂

• Link encryption service page (e.g. linkshrink) requires JavaScript to function. After 5 seconds, click CONTINUE button which appears on top-right of the page and it takes you to rtify page. Enter the password to access the links.
• PASSWORD/CRC Errors: re-download the files showing errors while unraring
• Single and Multiple 100mb Links: as one of our Goals is to provide support to Low-bandwidth users
• Use HJ-Split to join .001, .002 files
• Comments may be closed. There is no LOGIN functionality.
• Use Contact Form to convey dead links and suggestions, we ll try our best.
• ALL WE ASK FOR is your support. That’s it.

Thanks for the re-up, I had not realized I was missing so many in this series.

thanks for the star wars series, gonna download this.

any chance for uploading rambo series ?

I dont think so mate , at least not at this juncture
sorry to disappoint
but might, just might look into that in November provided we have enough funds to keep the operations running.

Hi, scorp. Link’s dead. Is it possible to make a new link? Thanks, scorp. 🙂

Gimme a few hours
will repack and reupload
stay tuned

Thanks alot, scorp. You are the best. Love your rips. 😀

done
took me a few hours at a stretch to redownload , unrara, repack , rerar , reupload , make fresh post screens and so much , hope you are happy

Thanks a million for your hard work, scorp. Super appreciate it. You are the best. 😀

thanks for ur thoughts scorp!

i also think without even watching a single movie of the series that is over rated. and relates to an older generation that is not relevant now.

today they are just milking it by making new flicks with some new characters and the cgi extravaganza but inside it is hollow nothing solid.

hey scorp i dont know what is the craze behind the star wars series. and why is considered americas cultural symbol of some sort i guess!!!

can u shed some light and no i have not seen the entire series uptil now but i might download now u have uploaded this. and also bcz that daisy ridley chick in the 7th one is cute as f!

I know with my comments , I might open a can of bees ;), But i find them highly over rated , i didnt enjoy a single Star wars flick , as a matter of fact I loved the star trek movies way more 🙂
But i feel this hype has to do with those initial 3 movies in the series , 77 , 80 and 83 , they were way ahead of their times , they were larger , technically very good for those times , the emotional element coupled with the starnge negativity of the certain key characters must have touched a cord somewhere.
The generation that became a fan of the series from the beginning just kept that up.

its something like what the Harry Potter series did to us , i am game for all stuff potter ,
But in my view , in present context wrt present sensibilities, Star Wars is just another series.

anytime 🙂
happy to be of use 🙂

Just created Uploaded referral, haven’t been here for a while, was hoping these links were still good. No biggie, great work sc0rp.

if you want these then i can reup them , i guess i have their backup
let me know plz
and many thanks

okay all links refreshed and reposted
have fun

Zippyshare links are dead please fix it. Thanks a Ton ScOrp..!!

no zippyshare links for parts 5,6,7,8 please fix thanks

THANK YOU SCORP! THANK YOU!!!

This is great! Thank you, scOrp!

any chance of getting Harmy’s STAR WARS Despecialized Edition HD?

awesome. many thanks for this 🙂

Whoohoo!! Scorp, you are one in a million! Now I’m just waiting for your delivery of episode 7…

sure
tghough the delivery of 7th will take some time ;P it has just hit the Cinemas less than a week back 😉

Same as Niti, does not matter the browser or anything else .
ad-blocker is disabled , even disabled all add-ons, still those websites are broken ,,both linkshrink and eafyfsuh they both keep opening multiple windows and ads everywhere .. and the link never shows up … its really becoming disgusting trend ….

Thank you scOrp for your hard work 🙂

Hey Bro
can u help me please
linkshrink sends to linkbucks.com
After that nothing happens
No links
I dont have any Adblock
help please
Thanks

use any other browser

A very nice surprise, scOrp. Thanks!

As was requested , here are the complete Hexology of the Star Wars episodes 🙂
have fun